Arcade Machines are hidden objects that can be found in each world. Once found, a Play Coin is required to unlock the machine's mini-game. If the player manages to beat Rextro's high score on the machine, its minigame can then be accessed from Yooka-Laylee's main menu. There are a total of eight playable Arcade Machines in the game.

If the player completes the task from Vendi to beat Rextro's score on three arcade machines, she will reward a Tonic to the player. 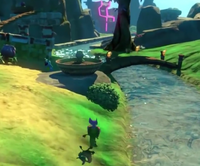 A giant arcade machine shown in the background of Tribalstack Tropics 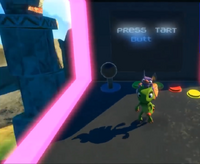 The front of the machine, which humorously reads: "Press tart butt."

Retrieved from "https://yooka-laylee.fandom.com/wiki/Arcade_Machines?oldid=29131"
Community content is available under CC-BY-SA unless otherwise noted.