"If you thought the challenges so far were tough, wait until you see my outlook for Q4 of the game!"
― Capital B

Capital B is the main antagonist of Yooka-Laylee. He is a capitalist bee who is the CEO of Hivory Towers and desires to convert all the world's literature into pure profit to have a monopoly over the book industry. It is up to Yooka and Laylee to stop him and his evil associate, Dr. Quack. He plans to use an all-powerful book called "The One Book" to rewrite the entire universe.

During the events of Yooka-Laylee and the Impossible Lair, while trapped in the Royal Stingdom tome, Capital B constructs a new lair that he claims is impossible to beat due to its difficulty, and has taken over the Royal Beetalion with the use of the mind-control device, the Hive Mind.

The "Capital" part of his name is because Capital B is a capitalist, "a person who uses their money to invest in industry for profit."

Capital in business is "money or other assets owned by a person or organization for investing."

The "B" part of his name is a homophone of the word "bee", which is Capital B's species. The name is also wordplay in that Capital B's name features a capitalized "B."

Capital B is a overweight yellow and brown striped bee in a purple pinstripe suit with pockets and two yellow buttons, a blue tie, and white undershirt. On part of his three-piece suit is an embroidered cape bearing the letter "B." He wears black gloves over his hands, holding a red cane with a honeycomb (similar to the honeycombs from Banjo-Kazooie). He has jagged teeth with one tooth missing. He has a bloodshot eye, amber irises, crooked eyebrows, and a pointed proboscis. He wears black dress shoes.

Appearance in the Impossible Lair[]

Capital B's physical appearance is the same, but his wardrobe has been changed. He now sports cauldron-like armor and a black cape with a silver outline and velvet interior. Red epaulets with gold tassels hang on each of his shoulders. A gold chain connects to the front of his armor to the back. He has a light blue band across his body, with three golden pins with green, red, and blue from left to right. The same three pins are also on his cape. He has large black boots and white gloves.

Capital B's personality is that of a stereotypical corrupt businessman, doing anything from paying Dr. Quack 'just above minimum wage' to ripping people off in Capital Cashino only to increase his profit. Capital B is also vain. In the background of Hivory Towers, there is a large golden statue of the Capital B himself, and he asks Dr. Quack if it is 'golden enough,' as well as a giant snow statue of him in Glitterglaze Glacier. He is cruel and unsympathetic to Dr. Quack, telling him to bin the "vice prezedent" statue for casting an "awkward shadow," and going as far as shredding pagies. He is also shown to be rather impulsive and angry, as he throws a tantrum when he doesn't get his way, or when he fails at something.

"How do a lizard and a bat become friends anyway? That doesn't make any sense."

"Your amateur moves aren't worth a dime, for a change I made this taunt rhyme!"

"Honestly, what's up with the bat's nose? I can recommend a good nose surgeon..."

"Smile, you're on CCTV! Seriously, watching you play is really dull."

"Casual Fridays are loads of fun, but even I draw the line at naked reptiles!"

"Health and safety said that I can't just drop all the boss minions in the lobby with you. Those killjoys!" 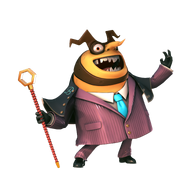 An official render of Capital B 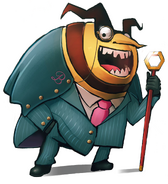 Model of Capital B

Capital B sitting in his office before his meeting with V.I.L.E.
Community content is available under CC-BY-SA unless otherwise noted.
Advertisement