Capital Cashino, the fourth world in Yooka-Laylee, is a casino-themed world. The player can find various casino games such as roulette tables, slot machines, Panchinko machines, and card tables to name a few. There are large amounts of gold scattered around the world, possibly being Capital B's revenue from his casino.

Capital Cashino is simply Capital B's casino combined with the word "cash," implying that Capital B receives a large sum of profit from it.

Directly across the world's spawn point. 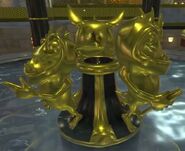 The world entry and exit.
Add a photo to this gallery

Retrieved from "https://yooka-laylee.fandom.com/wiki/Capital_Cashino?oldid=31448"
Community content is available under CC-BY-SA unless otherwise noted.