-
Corplets (Also known as Keiths, or Minions) are common enemies found throughout Yooka-Laylee, mainly in the main hub, Hivory Towers. Corplets serve part as Capital B's "employees", and were artificially created by Dr. Quack, along with every other Corplets Species.

There are more Corplet creations, but they appear as completely different creatures, such as bees, jellyfish, or even as giant orange grunts.

Corplets may wear a military hat with a Sergeant symbol on it, indicating that they are the leader of the other Corplets around them. These Sergeant Corplets have two health, compared to the normal one health Corplets. When all nearby Sergeant Corplets are defeated, all normal Corplets will shudder in fear and staying in place which makes them open to attack.

Corplets appear early in the game in Shipwreck Creek, guarding the Hivory Towers Entrance area. They often appear in groups, usually with one or more Sergeant Corplets.

Corplets also appear as enemies in the Overworld of Yooka-Laylee and the Impossible Lair.

Corplets are blue gremlin-like creatures with purple eyes. They have a huge mouth, uneven eyes, pointy ears, and orange spikes on the top of their forehead. Corplets have a blue body with a yellow belly.

Corplets in different worlds have different appearances based on their environment.

There are a total of six different variations of Corplets, all containing the same behavior and stats.

Corplets were first shown on a Twitter post by Playtonic Games.[1] On April 14, 2015, in celebration for reaching 30K followers on Twitter, Playtonic released a vine showcasing a Corplet's in-game model[2]. His first appearance was in the Toybox+. 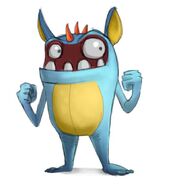 Concept art posted on Twitter.
Add a photo to this gallery 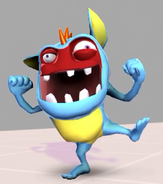 Retrieved from "https://yooka-laylee.fandom.com/wiki/Corplets?oldid=30013"
Community content is available under CC-BY-SA unless otherwise noted.