Dr. Puzz is a supporting character who serves as an ally in Yooka-Laylee series. She was once a research scientist employed at Quack Corp and an associate of Dr. Quack until Quack Corp was acquired by Hivory Towers. Sometime after the buyout, Dr. Quack stole all of Dr. Puzz's research and left her without a job. She now helps Yooka and Laylee on their adventure as a form of payback against her former colleague.

In Yooka-Laylee, Dr. Puzz can be found in all of the game's worlds, providing Yooka and Laylee a unique transformation in each one through the use of the D.N.Ray. The D.N.Ray requires a Mollycool to function, one of which can also be found hidden in each world.

She reappears in Yooka-Laylee and the Impossible Lair helping the Yooka and Laylee once again by providing a state change for Wild Web Woods. She is also the creator of Checkmate, a robot that acts as a checkpoint.

"Dr. Puzz" is a play-on-words combining "doctor," her profession, and "octopus," her species.

Dr. Puzz is a scientist that became human/octopus hybrid after a mishap with her D.N.Ray. According to the Yooka-Laylee Art Book, it is unknown which half of her, octopus or human, is her original form. She has blue eyes and black eyelashes with the top portion of her head colored violet. On her face are freckles. She wears a large fish bowl on her head that contains water and a goldfish swimming around. Surrounding the bottom of her head are six short tendrils, and she has four red octopus tentacles, two of which are coming out of the sleeves of her dingy, white laboratory coat. The coat itself is coated in multicolored blotches. Under her lab coat, she wears a yellow tight top that has a black skull on the front, along with black tights.

Dr. Puzz is kind-hearted and eager to help the duo. Being the inventor of the D.N.Ray, she is a fairly skilled scientist and engineer. However, she also appears to have an absent-minded streak, since most of her transformations never seem to go quite as expected. She is also incredibly optimistic, as she doesn't seem to be bothered by her newly-mutated form, nor does she acknowledge Laylee's insults toward her. She harbors a large amount of hostility towards Dr. Quack after his betrayal. 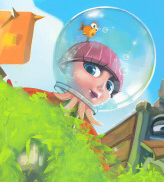 Dr. Puzz in the main boxart
Add a photo to this gallery 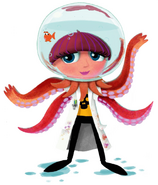 Concept Art as seen in the manual

Model of Dr. Puzz
Add a photo to this gallery

Retrieved from "https://yooka-laylee.fandom.com/wiki/Dr._Puzz?oldid=30386"
Community content is available under CC-BY-SA unless otherwise noted.