Evie is a green, snake-like Ghost Writer who will constantly run away while mocking Yooka and Laylee. If the duo successfully touches Evie, Evie will be collected. Evie is confined to a specific part of the world.

Evie is a long, green Ghost Writer who has a long tail and two dangling arms. It has two eyes with bright green pupils, an open mouth with jagged teeth, and the top of his head is curled.

Evade means to "escape or avoid, especially by cleverness or trickery". Evie tries to prevent being caught by running away from Yooka and Laylee. 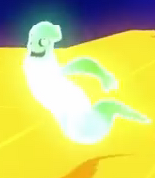 Retrieved from "https://yooka-laylee.fandom.com/wiki/Evie?oldid=31505"
Community content is available under CC-BY-SA unless otherwise noted.