Fee-Dee is a Ghost Writer that requires Yooka to feed it. Yooka must shoot either Frostberries or Bomberries inside Fee-Dee's mouth. Once fed, Fee-Dee's entire body will change from pink to lime green, and then it can be collected.

Fee-Dee is a pink round-shaped Ghost Writer who has a face on his torso, a rather large mouth, four teeth on his upper jaw, six teeth on his bottom jaw, two eyes on his upper body, and two long tentacle-like arms. Fee-Dee has short stubby legs, flat spread out teeth and his eyebrows float above it.

Fee-Dee name is a play-on-words of the words, "feed" and possibly the word "me", which means to give food to something or someone. Overall, his name means "feed me". The meaning of his name is also represented by his body language, as it constantly points into his mouth, which means it is asking to be fed. 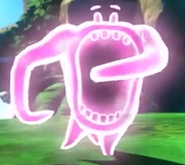 Retrieved from "https://yooka-laylee.fandom.com/wiki/Fee-Dee?oldid=31506"
Community content is available under CC-BY-SA unless otherwise noted.