“Don't tell anyone about the treasure. Especially not the armored brute with the shovel!”
― Lady Leapalot

Lady Leapalot is a character in Yooka-Laylee who is a member of the Knights of Hamalot.

As Lady Leapalot leaps a lot on her toy spring horse, her name, "Lady Leapalot," is a play-on-words of the phrase "leap a lot." It is also similar to the famous knight, Lancelot.

Lady Leapalot wears magenta armor which has a grill-styled face protector. She has a ponytail that exits through the back end of her helmet. She rides on a toy spring horse.

She is one of the friendlier knights to Yooka and Laylee. Like the other Knights of Hamalot she loves treasure, and is unwilling to share with other knights (especially Shovel Knight who she seems especially fearful of).

Model for Lady Leapalot
Add a photo to this gallery

Concept Art for Lady Leapalot
Add a photo to this gallery 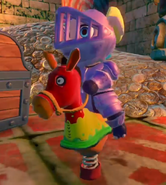 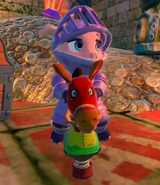 Retrieved from "https://yooka-laylee.fandom.com/wiki/Lady_Leapalot?oldid=31332"
Community content is available under CC-BY-SA unless otherwise noted.