The Minigames are small multiplayer games that are able to be played from the Yooka-Laylee home screen through Rextro Sixtyfourus' Arcade. Each minigame can host up to four players. There are 8 minigames in total, and in the main game, there are a total of 8 different arcade machines- one in each world except Hivory Towers and those plus an extra three in Hivory Towers.

Kartos Karting is a racing minigame. There are five laps, and the players must avoid rickety bridges, fire, and water jumps on a dirt track. The players are able to fire projectiles, along with different power-ups on the track to provide some help, similar to Mario Kart or another Rare title, R.C. Pro Am. The player with the fastest time wins.

Glaciators is a spleef-style minigame in which players must collect three different types of quills on a hexagonal-shaped arena: Gold, Silver, and Bronze. Nimbo also releases quills as well. The player with the most Quills at the end of the round wins. A crown appears over the current winner, and one can steal quills by attacking them. However, the floor tiles fall underneath the player, so the player will need to watch their footing. Each round is 180 seconds long. When there are 2 minutes, 47 seconds left on the screen, the center platform will lower. Nimbo will release Quills every interval of 30 seconds. The name "Glaciators" is a play-on-words of the word "gladiators" and "glacier."

Bee Bop is a platform minigame in which the player controls Corplet Drones. The player gains points by slamming on Corplets (although it's best to keep an eye on the Power Bar, as each attack drains it). Corplets spawn at random points, and a new set appear after the current ones are taken out. Different power-ups will also help the players, but they should avoid the flame spouts. The round lasts for two minutes, and the player with the most points wins. The game's title is a play on "be-bop".

Hurdle Hijinx is an Olympic-running themed minigame. The players must avoid poker chips, Cashino Corplets, and dice by running in between them, collecting Quills before reaching a large hoop at the end. The player with the most points is the winner.

Up 'N' Nova is a play-on-words of the phrase "Up and Over." This game plays much like a flappy bird-type game. The player collects Quills and avoid enemies and terrain until they reach the hoop at the end. The word "Nova" is a reference to a supernova which is a space object.

Gun-tlet Run is a shoot-'em'-up style minigame where the players must kill Corplets and Corplet Punishers to earn points. The player with the most points wins. The name "Gun-tlet Run" is a play-on-words of the phrase, "gauntlet run."

Blag the Flag is a capture the flag minigame. The players must capture a small red flag. The player receives points proportional to the duration the flag is held for. The players can hit each other to collect the flag from other players. The player who has the most points by the end of the time limit is the winner.

Jobstacle Course is an obstacle-themed game. The players must go through different sliding pieces as Corplets to collect Quills. If the walls close in on the player, they lose a ring of Quills but can respawn at any point close to where they fell. The player who has the most points by the end of the race is the winner. 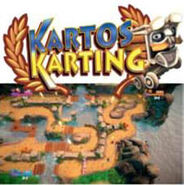 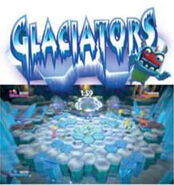 Add a photo to this gallery
Retrieved from "https://yooka-laylee.fandom.com/wiki/Minigames?oldid=31286"
Community content is available under CC-BY-SA unless otherwise noted.