"Argh! Come and 'ave a go if you think you're 'ard enough!!"
― Trev the Tenteyecle

Trev the Tenteyecle is the boss of Moodymaze Marsh. He is located inside of the Moodymaze Bunker, and attacks after Yooka and Laylee interrupt his T.V. soaps when they ask for his Pagie. Defeating this boss awards the "Creep from the Deep" trophy/achievement.

Trev is the shortened form of Trevor, an English male name. The name "Tenteyecle" is a play-on-words of the words "tentacle" and "eye." This is because he has three eyes on each tentacle.

Trev is a large Kraken with two very large eyes and an unknown amount of tentacles (for he never completely reveals himself, simply sticking certain body parts out of his room), each with three eyes. He has large suction cups on each tentacle opposing the side with the eyes, and all over he is pink and slimy.

Trev has a quick temper and doesn't like to be interrupted. He quickly engages in combat with the heroes when they say that they were trying to take his Pagie.

As the fight begins, the Upset Kraken will open a large door in the middle of the wall that he hides behind, and he will throw out one of his tentacles onto the ground. He will sweep it back and forth on the ground, to the right, then left, then right again. After the duo jumps over this, he will raise it up and smash it onto the floor, creating a shock wave that will harm the duo if it is not jumped over. The impact to the floor will stun him, and while he is out Yooka can use the Tail Twirl or Buddy Slam on his three eyes (once on the smallest eye, twice on the middle eye and thrice on the largest) to hurt him until he regains his consciousness and retracts the "tenteyecle" into the door. Be warned: If he regains consciousness before the player finishes whacking his eyes, he will repeat the above attacks, but will resume the position that he was in before afterwards, as it regards how many times each eye has been whacked.

After closing the large door, he will hang another tentacle from the ceiling and follow the duo with it from above. After a few seconds he will strike the ground with it, creating another shock wave that can be jumped over. When this is jumped over, he will repeat. After a second time the next phase will ensue.

To resume the fight, a hatch will open to the right of the door and Trev's large eye will be visible, watching the duo. Yooka can proceed to whack the eye with the Tail Twirl, and after three whacks he will retract it. Like the first phase if the duo do not whack the eye in time, he will retract it and repeat Phase II, but this time the duo will have to restart whacking the eye three times.

To mix things up a bit, Trev will proceed to raise the water from beneath the grate floor, forcing Yooka and Laylee to swim for the rest of the fight. He will then make a note of the change of fight difficulty and stick another tentacle out from beneath to chase the duo. After several seconds he will retract the tentacle and continue.

For the most of the rest of the fight, several other phases will be combined and mixed up in an attempt to destroy Yooka and Laylee. First, Phase I will repeat, with the same attacks and methods, with the only exceptions that the room is now flooded and the tentacle will be stunned for a shorter time. Next, Phase II will repeat, with the same exceptions. Then Trev will stick out an eye from the hatch to the left of the door, for a shorter amount of time than in Phase III, and when this is hit three times, he will retract it and repeat Phase IV. Next, Phase I will be repeated again, with the same exceptions (the stunned tentacle lasting even shorter), and when the "tenteyecle" is drawn back into the large door, the next phase will begin.

For the final part of the fight, Trev taunts the duo and enters a tentacle from above and below, combining Phases II and IV, which have to be dodged simultaneously; and when this is completed, Trev will stick his eye out of the grate to the right of the door for a last time, and when it is whacked three times (the same rules apply as before), his eye will fall out and Trev will surrender the Pagie.

On the far side of the world (easiest reached by Flappy Flight), inside a large metal pipe connected to a large metal bunker. After defeating Trev, this pipe will be blocked by a unbreakable door. 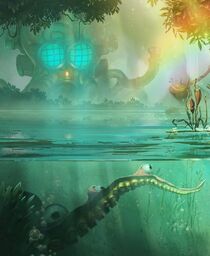 Trev hinted in an updated version of the swamp screenshot

The Upset Kraken tossing out his "Tenteyecle" for the first phase of the fight.
Add a photo to this gallery 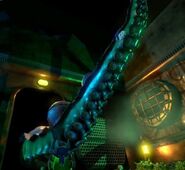 A very angry looking tentacle
Add a photo to this gallery

Retrieved from "https://yooka-laylee.fandom.com/wiki/Trev_the_Tenteyecle?oldid=31453"
Community content is available under CC-BY-SA unless otherwise noted.