Tribalstack Tropics is Yooka-Laylee's first world. It consists of tall floating Islands that have underbrush, a waterfall, Plant Bulbs, a huge tower, and numerous tribal structures which are scattered around the world. Yooka and Laylee first meet many of the common NPC's in this world.

Expanding this world will unlock the Tribalstack Monument, Nimbo's Mountain, floating islands, Shovel Knight's Mountain, the wooden floating platforms near the man-made Canals, and the boss section of Rampo's Temple.

Tribalstack Tropics makes an appearance as a stage in Brawlout.

Trowzer can be found on the second floor of Duke's Temple.

An early Tribalstack Tropics, back when it was known as "Jungle World"

The old Model of Tribalstack Tropics.
Add a photo to this gallery

Yooka and Laylee flying on the top of the Duke's Temple

Speaking with Nimbo on top of Nimbo's Mountain 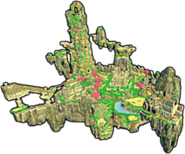 The world entry and exit.

Racing Nimble in the canals

Retrieved from "https://yooka-laylee.fandom.com/wiki/Tribalstack_Tropics?oldid=31716"
Community content is available under CC-BY-SA unless otherwise noted.