Trowzer is a supporting character that appears in Yooka-Laylee. He teaches Yooka and Laylee abilities at the cost of quills.

Trowzer's role in Yooka-Laylee is to teach the player new moves in exchange for a small fee of quills. After acquiring a move from Trowzer, he will explain its use. When the player speaks to Trowzer in Hivory Towers, he will give the player a new move free of charge to help open a new Tome and expand his business.

Trowzer's role in The Impossible Lair is dramatically different from Yooka-Laylee in that he expands the overworld in exchange for a certain amount of coins through the use of paywalls.

Trowzer's Theme in Yooka-Laylee and the Impossible Lair

Trowzer's name is a play on the term, "Trouser snake", a euphemism for male genitalia.

Trowzer is an Adder snake.[1] He has stripes of alternating light and dark red going across his back, a cream-colored belly, and yellow eyes. He wears an Australian slouch hat (which has a large bite taken out of it), a mustard-yellow striped necktie, and a black belt holding up a pair of khaki shorts, hence his name.

Trowzer's tail goes through one of the shorts' leg holes and then goes back up through the other hole, where it is situated next to his head; he rests his weight on the middle of his tail while sitting upright, and seems to use the end of his tail as a hand. His shorts feature a blue sewn-on patch on one side, giving the impression that his business ventures are not altogether successful.

He carries with him a brick phone, made by Brickcom, with the year 1985 written on the side.

Trowzer has been described as "a bit of a loser," and, "a business-snake whose career never took off"; despite this, however, he thinks he is the greatest salesman there ever was, and has also been called "smug". He owns a business called Trowzers Worldwide Incredible Traders Co. Ltd.[1]

Locations by World in Yooka-Laylee Edit

Trowzer's Character of the Day Artwork 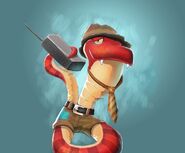 Trowzer's Early Design
Add a photo to this gallery

Trowzer in the character parade.
Add a photo to this gallery

Retrieved from "https://yooka-laylee.fandom.com/wiki/Trowzer?oldid=31140"
Community content is available under CC-BY-SA unless otherwise noted.