Yooka-Laylee (formerly codenamed Project Ukulele) is a 3D platformer and action-adventure video game developed by Playtonic Games, comprised mostly of former Rare, Ltd. alumni. The game is the spiritual successor to the Banjo-Kazooie series.[1] The game was released on Tuesday, April 11, 2017 with releases on PC, Xbox One, and PlayStation 4, and was published by Team17.[2] The Nintendo Switch version released on Thursday, December 14, 2017.

Hivory Towers is an evil corporation run by the money-and-control-loving Capital B and his scientist assistant, Dr. Quack, who used to run a company known as Quack Corporation before its buy-out by Hivory Towers. After learning of a book known as the One Book that has the power to re-write the universe, Capital B has Quack build a machine known as the Noveliser 64 (to suck up all the books in the world.

Meanwhile, Yooka and Laylee are enjoying the day in Shipwreck Creek renovating their Shipwreck home when Laylee’s book (found in the shipwreck), apparently the One Book targeted by Capital B, is sucked away into the nearby device. Its golden Pagies escape, and Laylee, deciding to sell it for a large sum of money, gets Yooka to help her after it. They explore Hivory Towers, collecting Pagies to restor to the book. With the help of Trowzer, a snake salesman who teaches them moves, and Dr. Puzz, an ex-Hivory Towers scientist who transforms the duo, Yooka and Laylee eventually reach the elevator leading to Capital B’s office.

Capital B allows them in granted they collect 100 Pagies total. When inside, he reveals it was a trap to refill the Book. Laylee says he will have to take the Pagies from them, and a battle ensues. After Yooka and Laylee win, they begin to question the Capital and Quack. But just then, their friend Blasto the cannon comes for medical aid and accidentally fires at the evil Hivory Towers leaders, knocking them into a nearby book as it locks them inside.

Yooka and Laylee proceed to invite everyone from their grand adventure for a party at Shipwreck Creek, and Laylee says the book “Is going straight in the safe when I get home. It’ll only appreciate in value!”

But when the party begins, Dr. Puzz declares Blasto the hero of Shipwreck Creek and holds the party in his honor, much to Laylee's dismay.

It is also revealed after the battle that Capital B is part of a giant corporation of evil business-people known as V.I.L.E.

At EGX Rezzed 2015, Playtonic revealed that the game will be a "huge celebration of 3D platforming games leveraging their experience." There will be sequences within the game where the player collects collectibles, with the main ones being pages called "Pagies." There will be several combos and moves to master alongside "beautifully themed" worlds to not only explore but to expand by collecting Pagies as well.[3]

After the first teaser was released, many fans speculated what the silhouettes of the animals were. At EGX Rezzed 2015, the (possibly) two main characters were hidden in a bush in the first hub world screenshot and could only be seen in the version shown at the event, as Playtonic Games tweeted an identical screenshot, but excluding the characters. It was further evidenced that it was them, as Playtonic tweeted the following: "And for everyone asking why we didn't introduce our new heroes today - we did. Didn't you see them?"[4] According to a Q&A on Playtonic's website, the characters would have a formal reveal sometime in May.[5] On April 30, Playtonic fully revealed the main characters alongside with their names.

There are a number of guest voice roles in Yooka-Laylee. During the Kickstarter campaign, backers could select a reward tier which involved performing a role for the game. Below is a list of the voices provided in the final game by non-Playtonic Games employees. 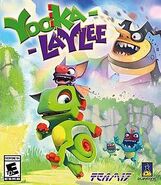 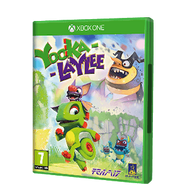 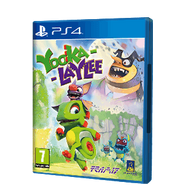 Asian Yooka-Laylee cover
Add a photo to this gallery

Screenshot of early designs of Tribalstack Tropics during EGX Rezzed 2015

Screenshot of early designs of what is now Hivory Towers

Preview of the Glide

There was originally a nighttime version of the old Tribalstack Tropics

Early Designs for the Grand Tomes 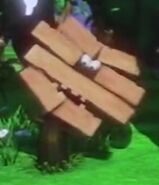 The duo, flapping through hoops.

The duo flying towards a castle.

Retrieved from "https://yooka-laylee.fandom.com/wiki/Yooka-Laylee?oldid=31423"
Community content is available under CC-BY-SA unless otherwise noted.