Yooka-Laylee and the Kracklestone is a graphic novel by D.M. Cumbo documenting Yooka and Laylee's adventures against Capital B and Dr. Quack to find the legendary Kracklestone.

The story sees Yooka and Laylee plunged into a brand new secret tome world in a race against the evil Capital B to reach the legendary "Kracklestone," an ancient artifact fabled to grant its holder invincibility. To reach the treasure, they’ll run, swim, trip, tumble, and fly through nine distinct, character-filled landscapes. They will encounter friends, foes, and some in-between... including plenty of fan favorites from the game!

But the path to Mount Zapkrackle will not be an easy one. Normally an asset, Yooka’s confidence proves hazardous when his decision-making repeatedly leads into trouble. Dr. Quack's troops await around every twist and turn, anxious to thwart the heroic duo.

In order to prevent unlimited power from landing in the hands of Capital B and his top hench-duck Dr. Quack, Yooka will need to accept the help of some (very) unusual allies! Only by working together with his quirky friends... and most of all with Laylee... does Yooka stand a chance of saving the day this time.... 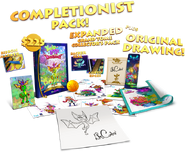 Add a photo to this gallery
Retrieved from "https://yooka-laylee.fandom.com/wiki/Yooka-Laylee_and_the_Kracklestone?oldid=29805"
Community content is available under CC-BY-SA unless otherwise noted.